Chatham House is one of the most important foreign affairs thinktanks in the UK. But on Wednesday its focus will not be a president, or an organisation like the World Bank, or the future of the EU after Brexit, but a religious leader: Pope Francis. And it will be the third time in recent weeks that Britain has turned its attention to the pope.

Two weeks ago, the Foreign Office-sponsored thinktank Wilton Park took delegates to the Vatican to meet the pope and discuss violent religious extremism, while last week the Metropolitan police commissioner, Cressida Dick, was in Rome to talk with Francis about modern slavery.

This engagement confirms the pope as one of the leading figures of the age. It will be five years on 13 March since the then Cardinal Jorge Bergoglio of Buenos Aires was elected leader of the world’s 1.3 billion Catholics, following the shock resignation of Pope Benedict XVI.

Since then, Bergoglio, who on election took the name Francis after St Francis of Assisi, has become hugely popular. Even atheists declare: “I love this guy!” on social media.

Fellow church leaders, such as the Orthodox leader, ecumenical patriarch Bartholomew, and the archbishop of Canterbury, Justin Welby, politicians and other public figures flock to meet him. The Chatham House event will explore the Roman Catholic church’s role in diplomacy, its relationship with the US, and the significance of the first post-western pope, who has diluted the Eurocentrism of the Vatican.

Yet in the Vatican itself, all is not well. Ever since his election in 2013, Francis’s efforts at reform have made him deeply unpopular with conservative Catholics, some in positions of influence within the Vatican itself. They have balked at his efforts to change the way the Vatican is run, including its bank, and to rethink the manner in which the church deals with failed marriages, including welcoming remarried divorcees to receive holy communion. Now the rumblings of discontent have spread to liberals who support Francis but are deeply upset by recent remarks he has made on child abuse.

It was quickly evident after his election that Francis was very different from Pope Benedict XVI, who resigned in February 2013, following a series of financial scandals in the Vatican. He had more energy and enthusiasm for meeting people than his diffident Bavarian predecessor, and also responded, as John Paul II had done before him, to the issues of the age. But whereas the Polish John Paul focused on communism and the cold war, the Latin American pope, a child of economic migrants, has turned his attention to the plight of people uprooted from their homes: refugees, victims of trafficking and modern slavery. In 2016, in a defining gesture of his papacy, after a visit to the Greek island of Lesbos, the entry point for thousands seeking asylum in Europe, he took home with him on his plane to Rome three families of Syrian Muslim refugees.

He is also deeply aware of the impact of climate change on the planet’s poorest regions and, in 2015, published his green encyclical, or teaching document, Laudato Si, which he subtitled On Care for Our Common Home, urging people to rethink their relationship with God’s creation. Conservative Catholics, especially in America, claimed he was telling SUV drivers that they were committing a sin. It is the document Francis seems most proud of, offering it as a gift to his visitors. Some, such as the Prince of Wales, appear deeply appreciative; others, such as President Donald Trump, far less so.

Francis Campbell, a former British ambassador to the Holy See and now vice-chancellor of St Mary’s University, said: “There is a lack of confidence about the future of society and Pope Francis is occupying a space that few others are. He is speaking to a constituency that is looking for a form of leadership.

“The fact that people who are not interested in religion are interested in him is a reminder of the lack of global leaders. Who else is not retreating into nationalism or isolationism? Who else is reminding us of the big ethical issues?”

As a world leader, Francis certainly appears to have little in common with Trump. During the Obama administration, the US president and Vatican diplomats worked behind the scenes to bring Cuba and the US towards some kind of rapprochement after an icy stand-off lasting more than 50 years. But there appears to be no love lost between the pope and Trump. The pontiff expressed disquiet at Trump’s decision to recognise Jerusalem as the capital of Israel, and warned of the need for a two-state solution.

The relationship certainly matters: America has 70 million Catholics, a potential voting bloc for the president, but also a possible source of huge donations for the church. 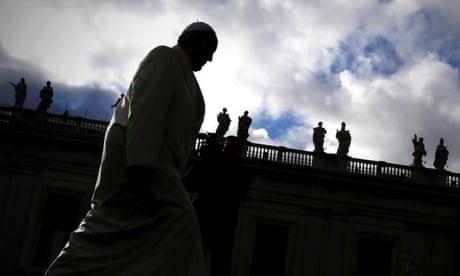 The war against Pope Francis

Ross Douthat, a leading conservative Catholic commentator in the US, has said: “Francis has turned around the public narrative so that Catholicism is not an oppositional force locked in culture wars all the time. But his personalised style has blunted his ability to work effectively in the institution of the church. There is a crisis of papal authority.”

Francis has also proved provocative on the subject of Europe, calling the continent a barren grandmother, hinting that his attention is turning to the other regions of the world where the Catholic church is growing. And when EU leaders met the pope as they marked the 60th anniversary of the treaty of Rome, he warned them of the forces of populism and nations turning inward. With the European project owing much to Catholic thinkers such as Jean Monnet and Robert Schuman, and Catholic theological ideas of solidarity and subsidiarity, it’s clear that the Vatican – which joined the euro – backs the EU.

Sometimes the moral papal voice has not been heard when it is expected. There was dismay when Francis failed to speak out about the plight of the Rohingya peoples during a visit to Myanmar last year. Vatican-watchers perceived a hesitance because Francis was wary of causing problems for the Catholic minority population there. For however much he operates on the world stage as a moral leader, his primary concern remains the Catholic church. And grave problems remain within it.

His efforts to reform the church began well. The Vatican machine has been slimmed down, with departments merged, and the number of grand prelates in charge reduced. Moneyval, the Council of Europe agency that monitors money-laundering laws, says the Vatican Bank has been cleaned up. One head of a religious order in Rome told me recently that the checks on depositing and withdrawing large sums have got noticeably tougher.

But since the man that Francis put in charge of financial reform, Cardinal George Pell, returned to his native Australia to face historical sex offence charges, progress has stalled. Nobody has taken Pell’s place.

There are whispers in the Vatican loggias that the pope is a communist, a populist and not a proper Catholic. The opposition to him was most clearly felt during the synods on the family in 2014 and 2015 over allowing the divorced and remarried to receive communion. Four cardinals later issued a dubia, or document of theological doubts – an unprecedented challenge to papal authority.

The feminist theologian Tina Beattie, professor of Catholic studies at Roehampton University, said: “Pope Francis is up against poisonous forces in the Church. He has tried to be gently pastoral about gay people and divorce but he is going to have to be more robust and be as tough as his predecessors in dealing with his critics.”

But it is in the response to child abuse where things have gone most awry in this pontificate. The signs at first were good: Francis set up the pontifical commission for the protection of minors but its two members who were victims of abuse themselves, Peter Saunders and Marie Collins, have since left, both expressing frustration at the lack of progress. Despite promises of a special court being created to deal with bishops negligent in abuse cases, and for it to be mandatory for bishops to report cases to civil authorities, there has been no progress.

Then came an astonishing outburst from Francis himself. During a visit to Chile in January, he had asked victims of abuse for forgiveness, on what had in effect been called an apology tour because of the abuse crisis. But he then defended Juan Barros, a man he named as a bishop in 2015, saying those who accused him of covering up for a paedophile priest were guilty of slander. This not only outraged victims but mystified them, as a letter from a victim had been sent to Francis via Cardinal Sean O’Malley, head of the pontifical commission and one of the pope’s most trusted supporters.

Collins has confirmed that it was she who handed the letter to O’Malley and that she is gravely concerned about the lack of progress by Pope Francis on countering child abuse. “I did have hope that Pope Francis would be the man to bring about change and his setting up of the commission for the protection of minors seemed to signal there was good reason for hope,” the former commission member said.

But, Collins went on, Vatican officials had made a concerted effort to thwart his early reforms and take control of the independent commission. Now she is distressed by Francis’s comments about victims in Chile: “It is a sad situation and shows an inclination to believe his clerical colleagues over survivors.”

Even though Pope Francis did then attempt to salvage the situation by dispatching Archbishop Charles Scicluna, one of the church’s most respected investigators of abuse, to Chile, this Latin American saga has turned into one unholy mess, threatening the credibility that Francis has sought to restore to the papacy. On Thursday, the Vatican tried to defuse the situation, confirming that Francis regularly meets abuse victims.

When Francis had been in office for only two years, he suggested: “I have the sensation that my pontificate will be short. Four or five years.” Now, though, he seems to have no intention to quit. There is much work still to be done.

But in Rome, the talk in the trattorias is about the succession, about who is papabile. The cardinals are likely to look at parts of the world where Catholicism is growing. Some suggest that the church will veer in another direction for the next leader, and a conservative cardinal might be elected, such as the outspoken Robert Sarah from Guinea, or maybe Malcolm Ranjith of Colombo. Asia is certainly one area of the world that Francis himself is focused on, keen especially to repair relations with China, where the government appoints its own, “patriotic” bishops, and the ones chosen by the pope run an underground church.

If he were to manage that under his watch, Francis might well think it was time to move on. For the world and for ordinary Catholics, this pope has certainly made an impact. He has above all tried to change the church’s tone, emphasising mercy and compassion, rather than rigid rules. But this way of thinking needs time to bed in, to become the norm. So after five years, this pope cannot yet say: mission accomplished.

Catherine Pepinster is the author of The Keys and the Kingdom: the British and the Papacy from John Paul II to Francis (Bloomsbury/T&T Clark)