There are a few ways you can lose your religion – in a slow drift where the time between mass attendance and sacraments like confession gets longer and longer, until you can’t in good faith claim to be a member of the flock any more. And then there’s the frank event, where something happens and you realise you cannot continue supporting the institution that has inflicted so much pain.

‘The last years of the church’s trials has turned ambivalence into anger and disgust but also something more complicated.’ Photograph: Markus Schreiber/AP

For many that moment of breaking off happened with the George Pell verdicts and during the royal commission hearing testimony from survivors of clerical sexual abuse.

Ripple effects of the royal commission and Pell’s trials have spread from beyond survivors to anyone who identifies themselves as Catholic. In Australia, that’s a lot of us – more than 5 million people.

What do those of us – the unmolested but disgusted, confused or defiant – do with our tattered church?

The last rough years for the church in Australia have forced many of us to consider some questions: what does it do to my faith now I know the institution has been protecting paedophile priests and moving them around to other parishes? What does it mean for me as a Catholic if Australia’s highest-ranking priest is in jail for molesting boys? Should I raise my children in the Catholic faith? And do these things that have degraded the church degrade my faith?

family members to an astonishing degree over the last 12 months.

Each person has had to accommodate the findings of the royal commission and the Pell verdicts in their own relationship to the Catholic church. Each Catholic has had to have their own private reckoning.

The public narrative playing out – a sort of culture wars narrative between the left and the right – does these private reckonings no justice. The adjustments and crises of faith that people have experienced following the verdicts are too subtle, personal and diffuse to fit in a left/right binary.

Among the people I know, a review of a relationship with the Catholic church can throw up responses as diverse as rejecting the finding of the jury and appeal judges – and believing there is a papist conspiracy – to abandoning the church altogether and walking away in disgust.

Without exception I’ve found that if your faith had been smouldering in a half life for a while, the Pell verdicts have been the extinguishing force. 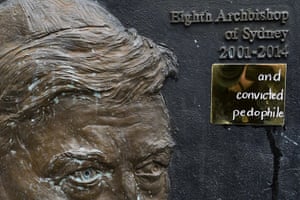 We are a Catholic country, at least culturally Catholic, with many of us growing up with a more intimate knowledge of a spirituality imported from Rome and Ireland, rather than a knowledge of the deep, centuries-old spirituality and stories of the stolen land we live on.

For those like me, who were already drifting away from religion, the last years of the church’s trials have turned ambivalence into anger and disgust but also something more complicated.

Leaving your religion can leave you with a void, particularly if you grew up marinating in the church’s beliefs and rituals (stations of the cross and the deprivation of Good Friday, the austerity of Lent and the anticipation of Advent, a novena if someone died, rosary beads as birthday presents, and vials of holy water some local pilgrim brought back to you from Lourdes, picking a confirmation name and a communion dress).

There are things to miss – midnight mass on Christmas Eve, somebody to pray to, the cleansing power of confession, the promise of everlasting life and no one really dying because you’ll see them in heaven (as long as you are good).

But it wasn’t just the saccharine stuff that was important. A Christian calendar learned early can, if taken on its allegorical elements, be a good preparation for life too. In it there is a season of suffering and pain – the Bible is riven with blood and pain and loss. You need to know these things to be unsurprised when the suffering comes along.

And in the New Testament and through the figure of Jesus there is an extraordinary model of how to be a good person and lead a decent life.

“Whatever you do to the least of my brothers, you do unto me” remains one of the most radical statements ever made by a public figure. If only we could live by that, how different the world would be.

Yet how do we square all this with the evil done to children in confessional booths and sacristies and presbyteries around the country?

What’s happening across Australia now is a Catholic nation’s reckoning with the sins of the church. It’s happening in our heads, hearts and our souls – if we still believe in souls. The process is often deeply felt and strangely emotional. But its outcome (the net result of those millions of private, individual reckonings) is also of national concern.