High above Bonne Nuit Bay on the north coast of Jersey, a grey-bearded 69 year old with binoculars around his neck and a glint in his eye is emerging from the foliage on a clifftop path.

The beach here was once a filming location for the hit TV detective series Bergerac and there is a hint of that maverick detective about Bob Hogge.

In his waxed coat and wellingtons, he is far from the womaniser played by John Nettles. But Bob also likes to get his man – or rather his pest.

‘This game is all about patience,’ Bob tells me. By the time we meet he’s been lurking here for six hours. 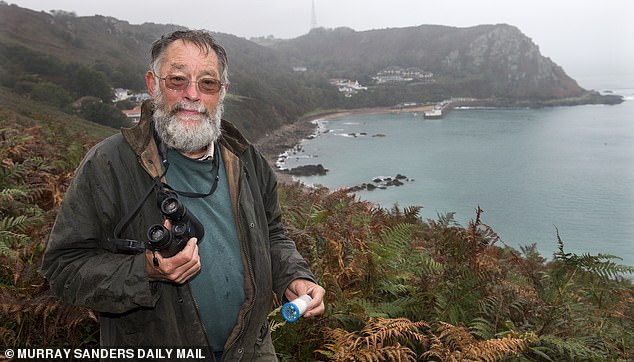 Volunteer Bob Hogg, 69, spends hours tracking Asian hornets in Jersey for them to be tagged, leading the team to the main nests 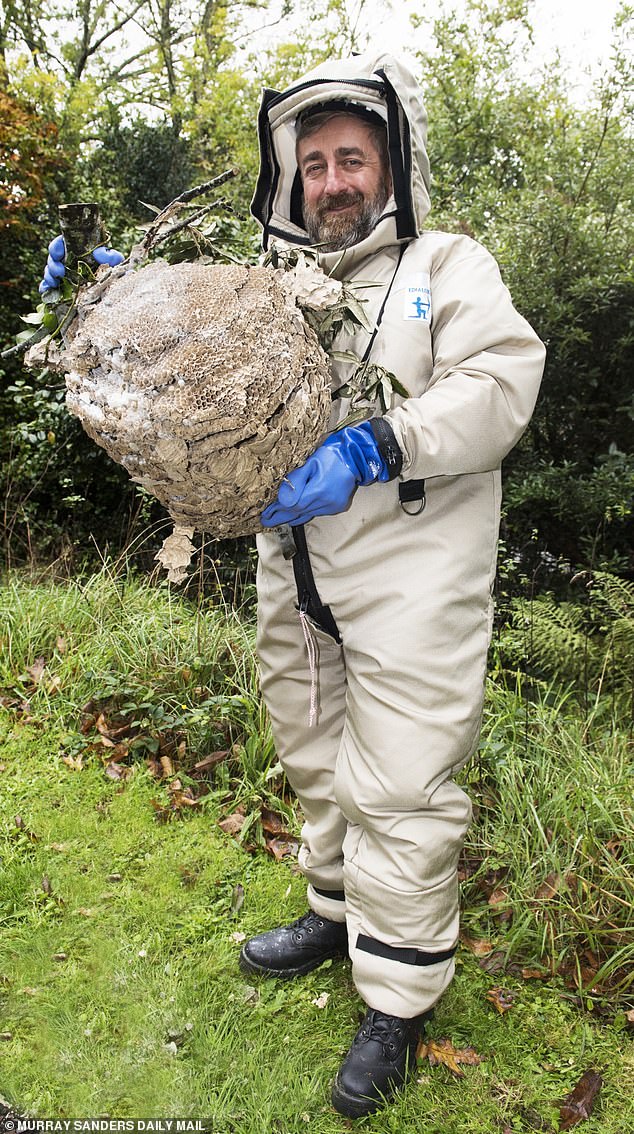 The pests in question are Asian hornets, foreign invaders and ruthless killers of other flying insects – particularly honey-bees. They can consume up to 50 a day.

Lying in wait for the bees as they return to their hives, the hornets first decapitate them and rip off their wings, making it easier to carry the bees back to their own nests as protein-rich morsels for their young.

Should the hornets become established in Britain, they will pose an enormous threat to our honey-bees, already badly affected by habitat loss, parasites and pesticides.

Asian hornets first hitched a ride to the West in flower-pots exported from China to France in 2004.

They have since spread rapidly across Europe, arriving in Jersey in 2016 when winds carried fertilised queens over from France. Since then there have also been 17 sightings on the British mainland.

Asian hornets have a dark brown or black velvety body, have a yellow or orange band on the fourth segment of the abdomen and have yellow-tipped legs.

Last year alone saw seven nests destroyed, but the problem is getting bigger. Yesterday the British Beekeepers Association (BBKA) revealed a possible sighting on the mainland, with a nest reported in the village of Rogiet, Monmouthshire, though this cannot be confirmed as it was destroyed.

Siân Fry, a 37-year-old housewife and mother-of-two whose husband Ben discovered the nest in the roof of their garden shed said: ‘It was only very small so I got brave and bold and pulled it down myself.’ 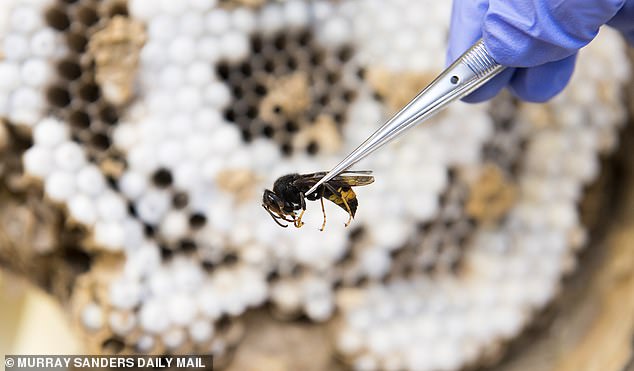 Asian hornets (pictured) are foreign invaders and ruthless killers of other flying insects, particularly honey-bees, and can consume up to 50 a day. There have been 17 sightings of the hornets on the British mainland 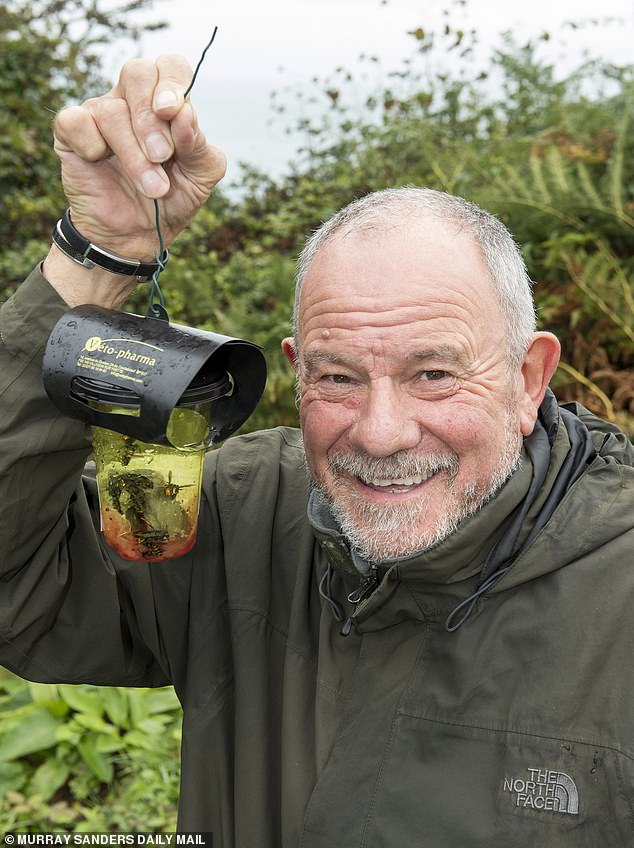 If the hornets become established in Britain, they will pose a threat to honey-bees. The insects arrived in Jersey in 2016 when winds carried fertilised queens over from France. Pictured, volunteer Bob Tompkins, who helps capture and tag the hornets.

She uploaded a photo of the nest to an app launched by the Department for Food, Environment & Rural Affairs (Defra).

‘There were about seven hornets flying angrily around it, so I threw it in a bucket of water and it disintegrated.’

If the queen survived, as seems likely, she will have flown off to create a nest elsewhere. That’s an alarming prospect, as is illustrated by what happened in Galicia in Spain where the problem went unchecked.

Which brings me to Bob Hogge and a small army of dedicated bee keepers in Jersey – the frontline – who are determined to fight this enemy on the beaches, in the woods and anywhere else they might buzz into view.

With a gung-ho refusal to take the invasion lying down, they have raided garden sheds, drinks trolleys and even wardrobes in search of ever more inventive weapons.

Spotting the hornets is only part of the challenge. What matters is finding and destroying their nests. These wood-like spheres are made of solidified pulp, created by the hornets scraping up rotting materials such as tree bark and mixing them with their saliva.

At this time of year, the nests may be no bigger than a tennis ball but by autumn, when they can be bigger than a dustbin, they can still be incredibly hard to spot, their woody appearance camouflaging them well.

Elsewhere in Europe, nests tend to be discovered by accident, or when trees start shedding their leaves. By then it is too late because the fertilised queens will already have left to begin hibernating elsewhere, emerging in spring to build new nests. 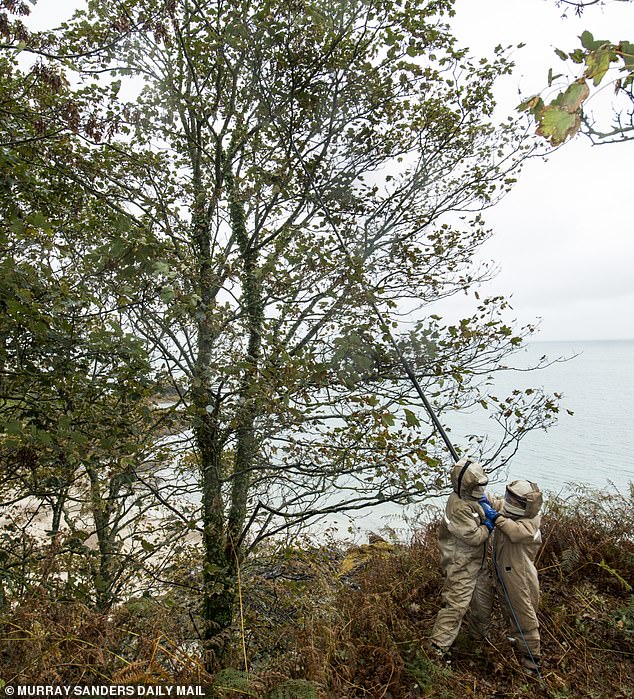 On Jersey, Bob and his team have focused on locating and destroying nests before the queens have departed by mid-October. Pictured, Frank Raimbault (left) and Brian Morin with the lance used to penetrate the Asian hornet’s nests 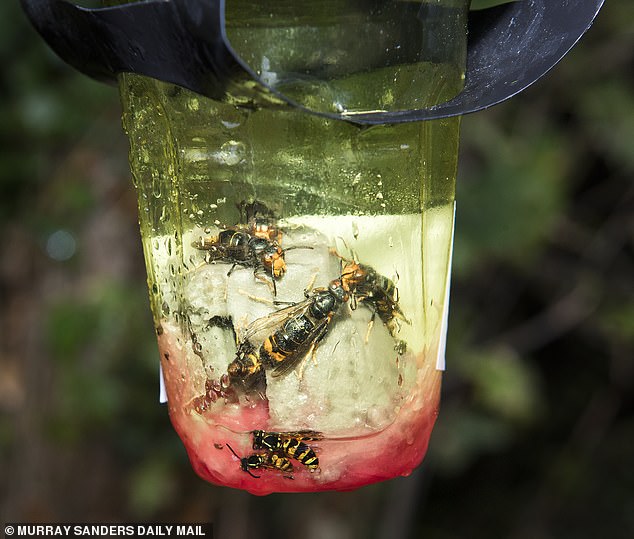 On Jersey, Bob and his team have focused on locating and destroying nests before the queens have departed, by mid-October.

Noting which way the hornets fly, the hunters place ‘bait stations’ – jars of hornet ‘attractant’ – further and further along the flight-line until they are eventually so close to the nest that they can see the hornets flying into it.

So that they can spot the insects in the air, they trap them in plastic tubes at the bait-stations and mark their backs with brightly coloured pens or dabs of paint. Sometimes they even superglue feathers to the hornets.

‘One volunteer plucked one out of her feather boa so she could see a hornet as it went up into the tree-line,’ explained Alastair Christie, a former lavender farmer and the island’s first Asian Hornet Co-ordinator. ‘They’re pretty beefy insects and fly off merrily, regardless what you’ve stuck to them.’

Last year 83 nests were found on Jersey, most of them in trees but also in compost bins, roof spaces and even in a rabbit warren.

When we met last year, Bob Hogge was not sure where the hornets in the vicinity of Bonne Nuit Bay were nesting, but his bait station hanging in a tree on the cliff top had attracted several, which buzzed loudly as they landed on the top of what looked like a plastic cup with a straw of tissue paper poking through the lid that was ‘wicking up’ the attractant inside.

Finding the right bait was hard. For six weeks Bob experimented with beer, wine and the blackcurrant liqueur cassis — but he eventually found the hornet equivalent of cat-nip in his own shed.

‘I was rootling around and found some old commercial attractant I’d used for a wasp census,’ he says. ‘They flew straight to it.’

The hornets hovering within a few feet of my face at Bonne Nuit certainly seemed to like it. 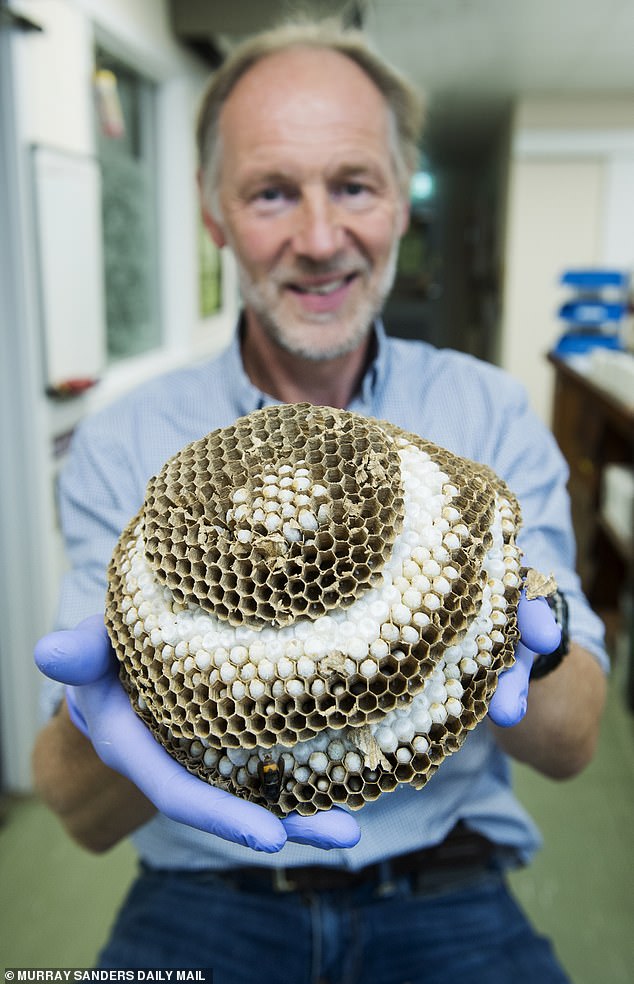 Pictured, Alastair Christie, Asian hornet coordinator for the States of Jersey, holding an example of the hornet’s nest

What’s more they appeared remarkably docile — just as well because they can deliver a sting which in 2018 almost killed one Jersey resident who suffered an allergic reaction.

Even for people who are not allergic, it can be a pretty painful experience, said Bob Tompkins, 70, another of Jersey’s hornet-hunters, as we watched the island’s pest controllers destroy the 71st nest found on Jersey.

It had taken Bob two weeks to track it down, driven by personal experience of the damage these predators can do.

‘My wife Jill and I have kept bees for 35 years and this year we lost a hive to Asian hornets,’ he explained. ‘You build up these colonies over a long time and it’s very depressing when something like that happens.’

A clamber down a steep, bramble-covered path led us to a sycamore tree positioned dangerously close to the cliff edge overlooking La Coupe Bay.

Although the nest was as big as a beachball, I could only make it out when the pest controllers took aim with the huge telescopic lance which injected a deadly dose of pesticide.

The three men taking this nest on were wearing protective suits thicker than those worn by bee-keepers. They needed them.

As the lance pushed up through the branches towards the nest, the hornets emerged, swarming furiously and attacking the lance. Small clouds of pesticide billowed around them and the nest.

Within 24 hours it was safe for tree surgeons to remove the nest and its occupants to be disposed of — another small victory against the invader.

n Sightings can be reported using the Asian Hornet Watch app available for iPhone or Android and by email: alertnonnative@ceh.ac.uk