Editor’s note: The people photographed and interviewed by CNN did so on the condition that they are only identified by their first names to preserve their anonymity.Warsaw, Poland — The protesters who marched through the Polish capital’s icy streets on Friday night had a clear message for the government over its imposition this week of a near-total ban on abortions: We will stand up for women’s rights.It was the third day of protests since the ruling came into effect — and marked 100 days of protests since Poland’s constitutional tribunal court first handed down its controversial ruling, sparking weeks of mass demonstrations.Following those protests, the government had signaled it was open to dialogue. But on Wednesday it unexpectedly published the law enforcing the court’s ruling, which states that abortions may only be permitted in cases of rape, incest or when the woman’s life is in danger and bars the termination of pregnancies with fetal defects.

The Constitutional Court’s ruling marked the first change to Polish abortion law since 1993, but came after a years-long effort from the country’s right-wing government to curtail access to abortions. The ruling Law and Justice Party (PiS) has placed anti-abortion rhetoric at the heart of its socially conservative agenda, and attempted to pass a bill banning abortions due to fetal defects in the early weeks of the coronavirus pandemic.Wednesday’s move prompted demonstrators in the capital, Warsaw, and other cities — including Krakow, Bydgoszcz, Opole, Szczecin, Łódź and Wrocław — to defy a pandemic-related ban on gatherings of more than five people and take to the streets again. 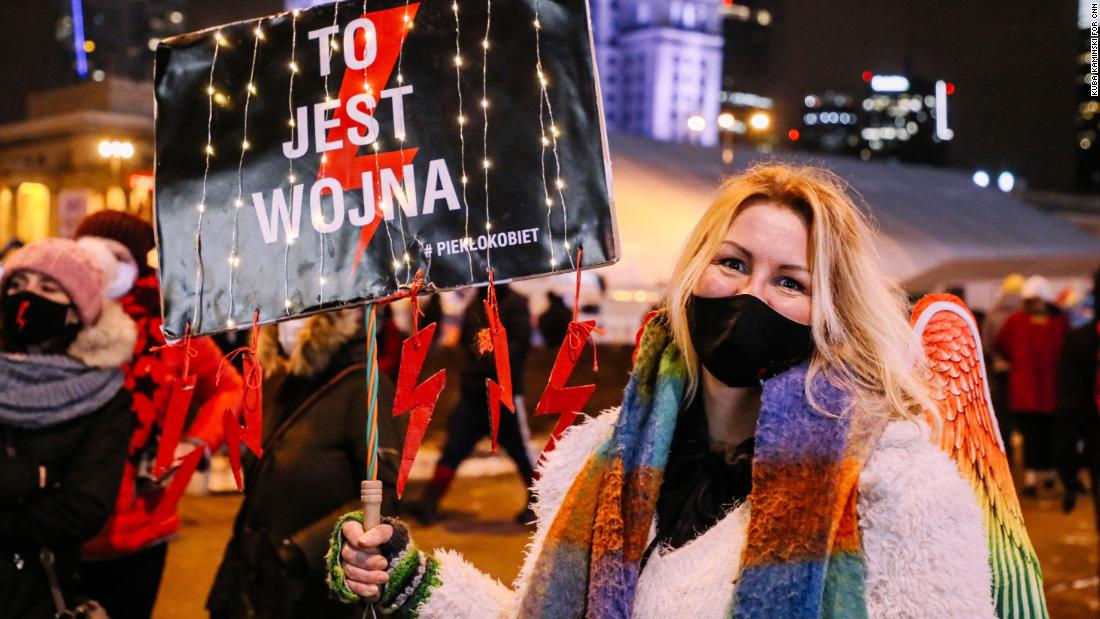 Corporate worker Eliza carries a placard saying “This is war” at Friday’s protest.A rights group known as Women’s Strike has led the opposition to the new law, as abortion has emerged as one of the most divisive issues since the PiS came to power in 2015.Those who marched in central Warsaw on Friday carried placards declaring “Abortion without borders,” “Abortion is my right” or “You will not burn these witches.” Banners bearing the lightning bolt emblem of the Women’s Strike movement fluttered overhead, along with the red and white of the Polish flag.Some spoke to CNN about why they had turned out despite the pandemic restrictions, extended Thursday until mid-February, and a heavy police presence.”It’s very important to be here, because women’s rights are being trampled,” said 17-year-old high school student Zuzia. “I’m showing support for the movement.”Corporate worker Eliza, 46, who carried a placard saying “This is war,” said: “I think all women are here for freedom for Polish women. We are protesting here. A group of women saying ‘no’ to our government and their decisions.” 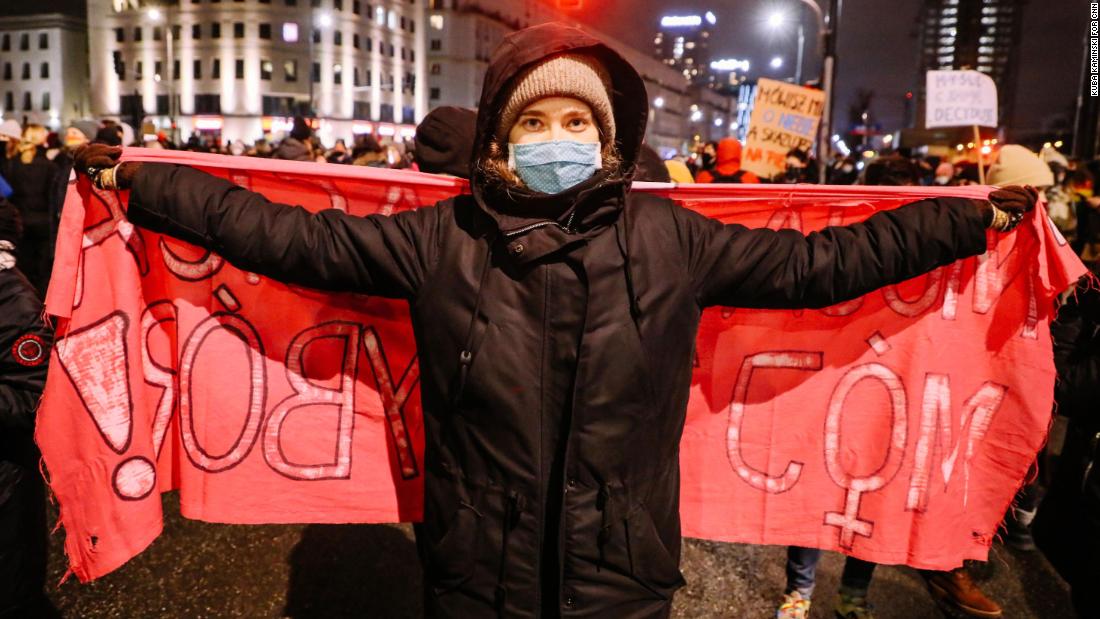 Protester Julia, 23, carries a banner at the protest. 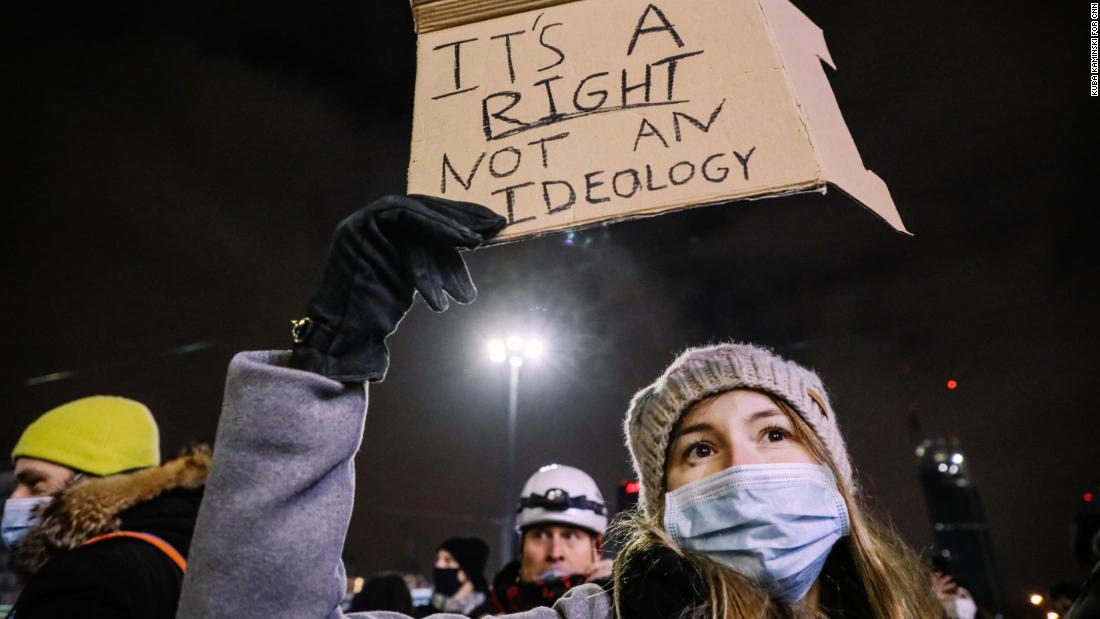 Psychology student Dagmara, 25, believes in respect for all.”We are here because the new abortion law’s verdict came into force and women became live incubators,” said Julia, 23. “The matter is simple to me: I want to have my rights and choice and I think everybody thinks similarly here and we have to support one another.”Psychology student Dagmara, 25, carried a sign saying, “It’s a right, not an ideology.”

“It’s my duty as a citizen to be here and fight for freedom. It’s the 21st century and respect and tolerance for everybody is a must.”Dagmara, student, aged 25

Police were deployed in significant numbers in central Warsaw. Loudspeakers on police cars broadcast the message that the gathering was illegal and called for those gathered to disperse. Video of the protest showed what appeared to be tear gas being used.But the crowds of demonstrators remained defiant as, wrapped in thick coats and scarves and wearing face masks as a precaution against Covid-19, they walked toward the official residence of PiS chief Jarosław Kaczyński in the city’s northern Żoliborz district. 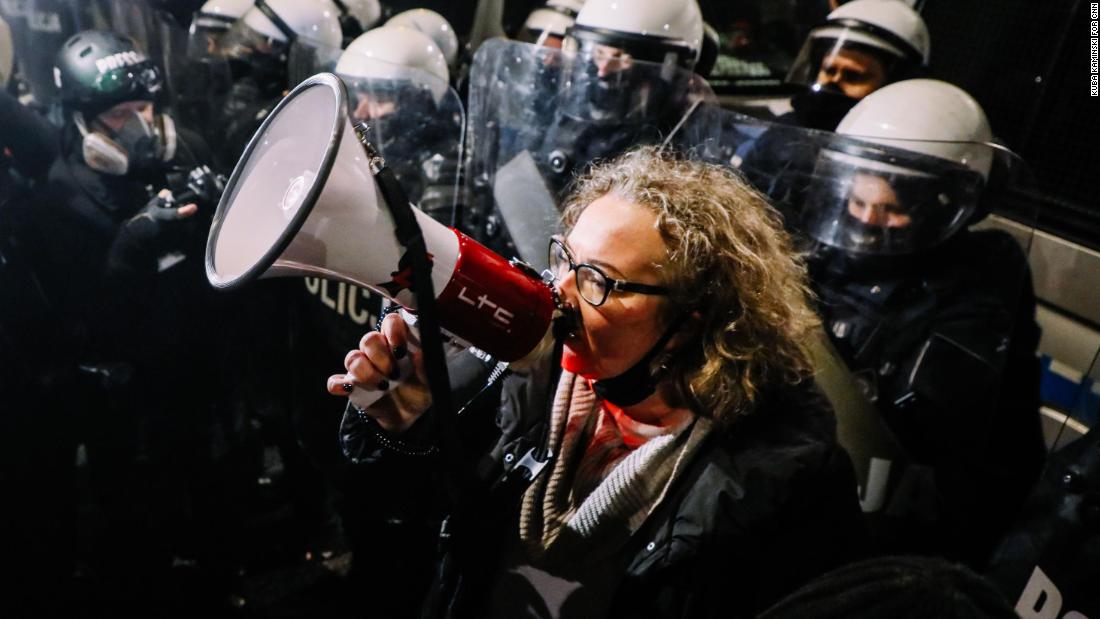 Women’s Strike leader Marta Lempart rallied the protesters as they marched on Friday. 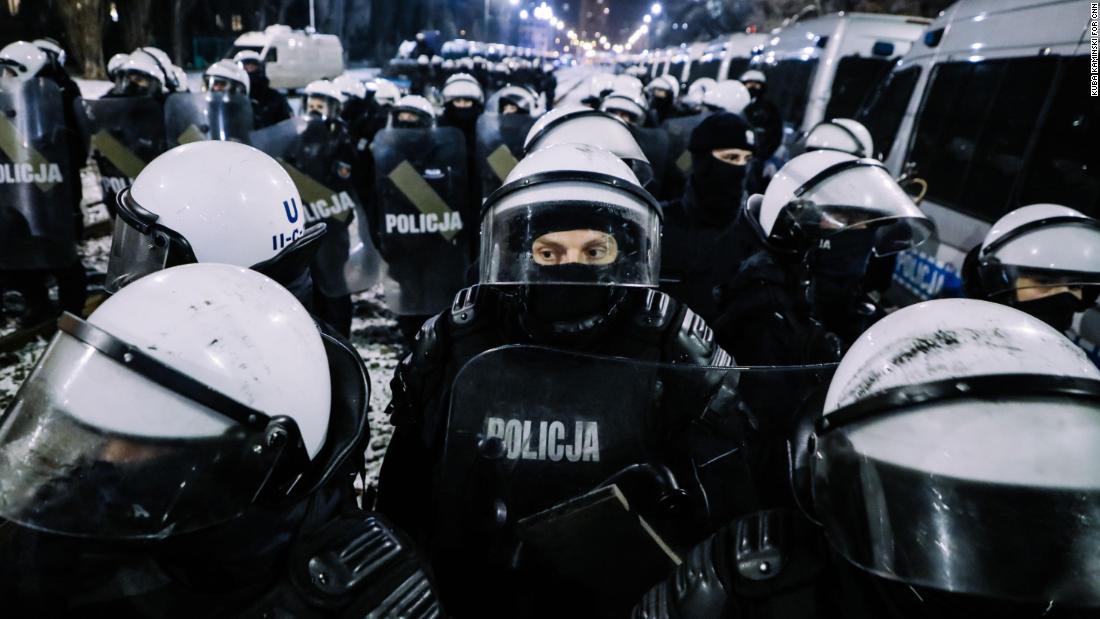 Police blockades prevented the demonstrators reaching the official residence of PiS leader Jarosław Kaczyński.The protesters, galvanized by Women’s Strike leader Marta Lempart, took detours down back streets to avoid police blockades. But a large police presence prevented them from getting close to the residence and the protest eventually broke up after midnight.Kaczyński, the country’s deputy prime minister, is widely seen as the de facto decision maker in Poland and the driving force behind the new abortion law. Even before it came into force, the staunchly Roman Catholic country had some of the strictest abortion rules in Europe.Abortions due to fetal defects comprised approximately 98% of all legal abortions carried out in Poland in 2019, according to data from the Polish Ministry of Health.Further restricting abortion is seen by the law’s critics as the latest attack on social freedoms by a right-wing government that openly disdains Western liberal values, uses homophobic rhetoric and has eroded protections for the LGBTQ community. Pride flags have been a common sight among the crowds of protesters. 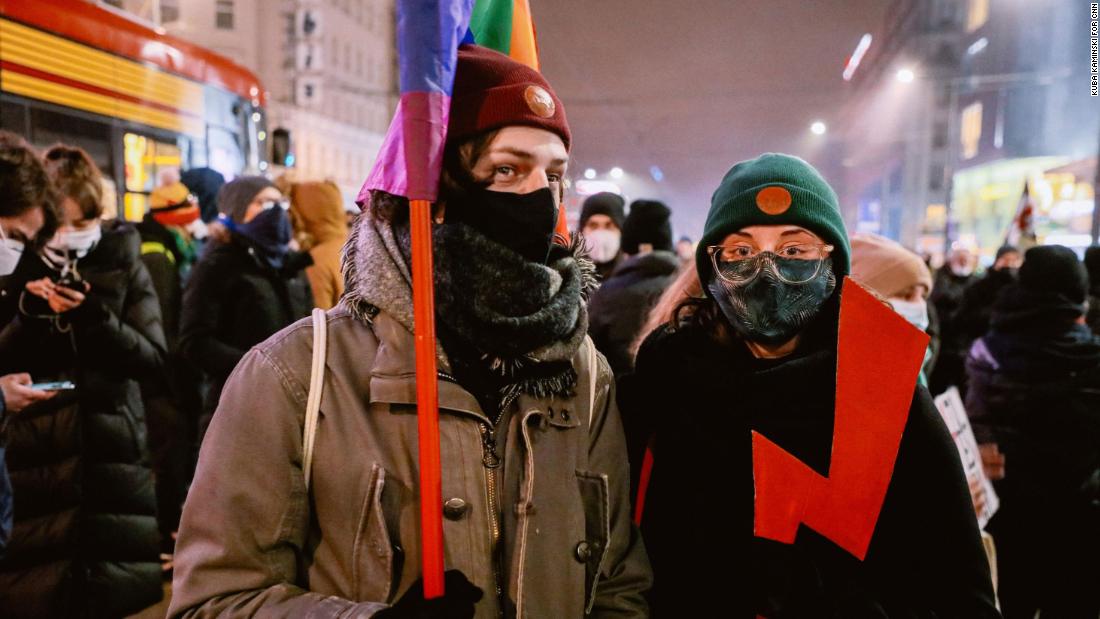 Students Antek and Aneta are opposed to the government’s stance on LGBTQ rights. 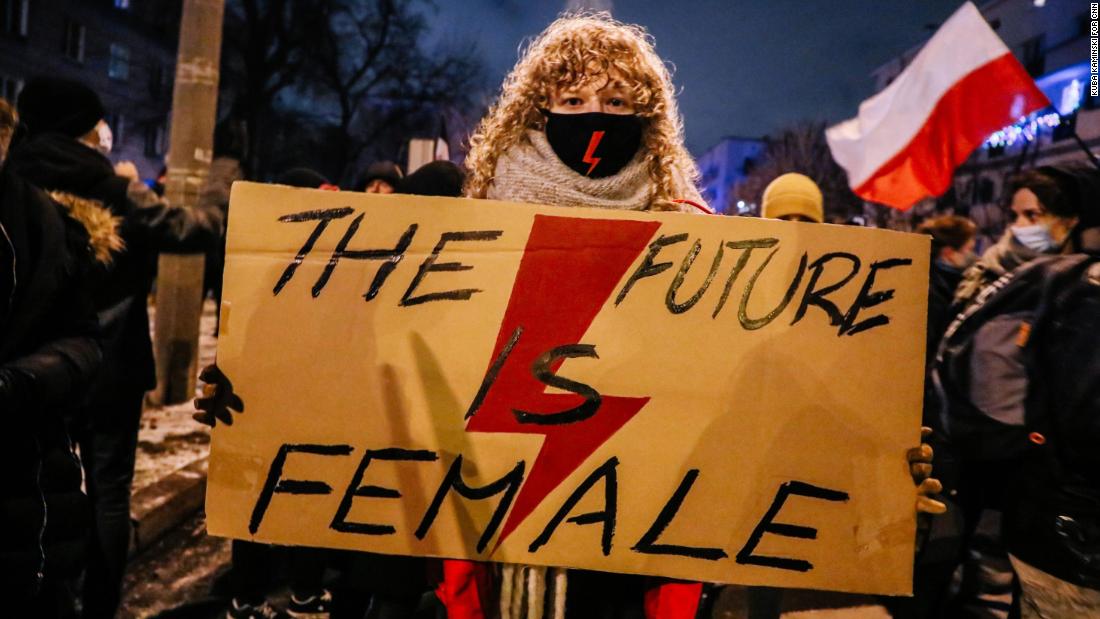 Weronika, 22, holds a banner with the Women’s Strike symbol.”This verdict is despicable,” said 25-year-old student Antek. “We are LGBT people and the government hates us,” said fellow student Aneta, also 25. The pair carried a rainbow flag and the red lightning bolt symbol of the Women’s Strike movement as they walked.Weronika, 22, said: “I’m here in solidarity with all the women and all the men who stand with women, with all non-binary people and all the people that have had enough.”Neither the PiS nor President Andrzej Duda, who is backed by the PiS, have commented publicly on the fresh round of protests. CNN has reached out to the offices of the President and Prime Minister for comment.Kaczynski in October described people protesting over the abortion ruling as criminals and warned that their actions in the middle of a pandemic would cost lives.

Some in Poland may leave the country because of this law 01:38Meanwhile, to those in the protest movement, the Catholic Church and the PiS form a powerful bloc determined to impose an intolerant, ultra-conservative agenda.Mayor of Warsaw Rafał Trzaskowski, of the opposition center-right Civic Platform party, joined the protest Friday, saying on a Facebook Live that he “stands in solidarity with the Women’s Strike.”Dariusz Rosati, a Civic Platform MP, said the governmental ban on assembly is illegal and accused the police of putting the protection of Kaczyński above that of other institutions such as the parliament and Council of Ministers. “They protect Kaczyński. The guest responsible for the destruction of the state, for setting Poland on fire, for unleashing hatred. Disgrace,” he tweeted late Friday.Warsaw Police tweeted Friday night that its aim was to secure the protest while minimizing inconvenience to other people. “We evaluate the situation only through the prism of ensuring safety. Also the safety of other inhabitants of our city,” the force said.Meanwhile, Urszula Sara Zielińska, an MP from the Green Party, tweeted that each of those who had turned out in protest “despite the frost, pandemic and fear of police repression” represented “hundreds of thousands of others who do not want to live in a sick country.”It’s unclear whether the latest protests will persuade the governing coalition to pursue a different course.But the dispute over women’s reproductive rights has once again laid bare the cultural, moral and political divisions that run deep through Polish society.