Some 5,000 people joined an anti-fascist march in Sarajevo in protest against a Catholic mass to commemorate the killings of Croatian Nazi-allied troops and civilians by the Yugoslav Partisans at the end of World War II.

The mass, which was held under heavy security in the Sacred Heart Cathedral in the old part of Sarajevo, has been condemned by the US and Israeli embassies, many politicians and public figures and the World Jewish Congress, an international organisation representing Jewish communities.

Saturday’s protest was the first large rally in the city since the easing of restrictions on movement to curb the spread of the coronavirus.

Some of the protesters sang World War II-era Yugoslav Partisan and anti-fascist songs, and chanted slogans like “Smrt fasizmu, sloboda narodu” (“Death to fascism, freedom for the people”).

Aida Feraget, a PR expert who was wearing a red scarf instead of a face mask and chanting anti-fascist slogans with a group of friends, said Sarajevans gathered despite the fear of infection.

“The coronavirus is something that provokes fear, definitely. However, the danger that the revival and glorification of fascism brings with it is far greater. Sarajevans felt it and today showed that this city is bigger than fascism and fear,” Feraget told BIRN.

The protesters gathered next to the central government building at a monument to dozens of anti-fascist activists executed by the Ustasa just days before Sarajevo was liberated on April 6, 1945.

Above the memorial, a big picture was displayed showing some of those who were hanged in 1945, while a cellist played sombre music.

The protesters then walked some two kilometres up Sarajevo’s main Ulica Marsala Tita (Marshal Tito Street) towards the Eternal Flame memorial which commemorates some 10,000 victims of the Ustasa occupation of Sarajevo.

On the building behind the Eternal Flame, the same photo of the hanged anti-fascists was on display, while a giant banner with the words “I’m an anti-fascist too” was suspended above the street.

The mass was one of two replacements for a controversial annual gathering usually held at Bleiburg in Austria, which has been cancelled this year because of restrictions imposed due to the COVID-19 pandemic. The other event is being held in Zagreb.

The annual Bleiburg gathering is controversial because some participants display symbols of Croatia’s Nazi-allied Ustasa movement, which killed Jews, Serbs, Roma people and others during WWII in the Independent State of Croatia.

The Catholic Church in Carinthia in Austria last year rejected a request from the Croatian Bishops’ Conference to hold a mass at the Bleiburg commemoration because it said the event was being used to promote nationalist ideas.

The Bleiburg gathering commemorates the massacres by the Yugoslav Partisan army in the Austrian border area of Carinthia of tens of thousands of Nazi-allied Croatian troops and civilians who were fleeing the collapse of the Independent State of Croatia and the Ustasa regime. 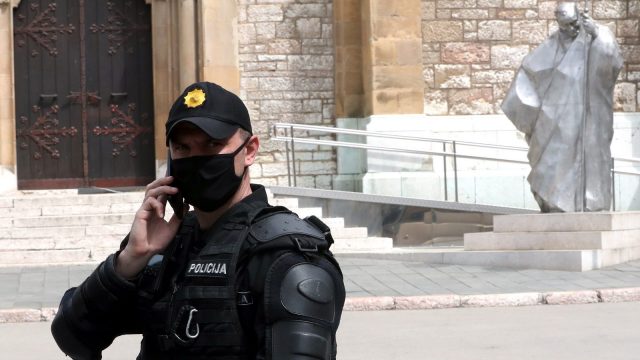 A police officer outside the Sacred Heart Cathedral in Sarajevo before the memorial service. Photo: EPA-EFE/Fehim Demir. 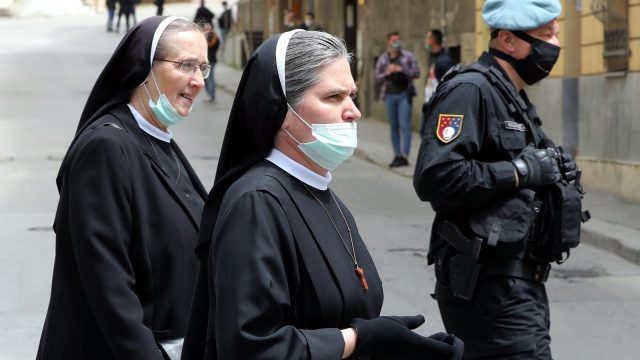 Catholic nuns are escorted by a police officer as they approach the Sacred Heart Cathedral. Photo: EPA-EFE/Fehim Demir. 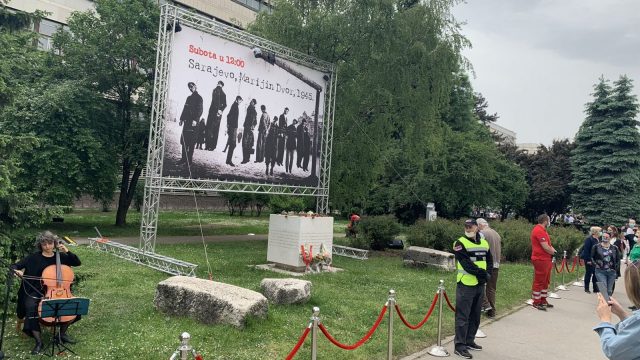 The start of the protest walk at a memorial for anti-fascists killed by the Ustasa. Photo: Nedim Dervisbegovic.6am 5cm 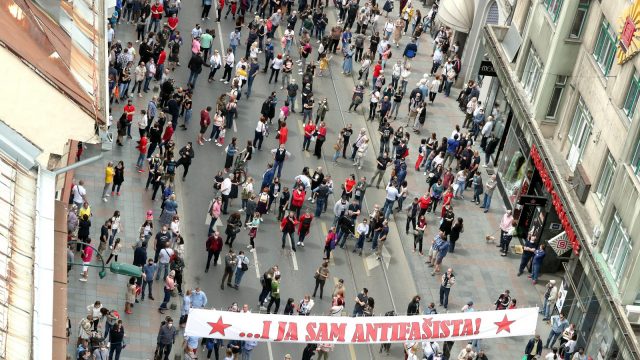