It’s hard out here for a pope. See, when it comes to religious history, the list of Catholic Church transgressions makes for pretty uncomfortable reading. Despite exalting virtue and kindness in its teaching, church leadership has spearheaded a long history of outright unforgivable Catholic actions.

You might remember some of these improprieties from school – the Inquisition, Joan of Arc, and the trial of Galileo should all ring a bell. But not everything here is medieval. Though Vatican violence goes way back, a number of disturbing episodes are from recent history. Some of this repugnant behavior comes from popes, some was church-endorsed, and some, most unsettlingly, was just straight-up regular church practice.

Dark church history contains scandal after scandal rife with every vice and taboo you can imagine. When the church was at the height of its power (at which point it was the most powerful organization in the Western world), it’s safe to say everything went to its head. Combine that with church leaders seeming to stubbornly resist adapting to changing morality and you’ve got a whole lot of unforgivable moments on your hands.

END_OF_DOCUMENT_TOKEN_TO_BE_REPLACED

By CHRIS DYER FOR MAILONLINE

The Catholic Church in Germany has admitted making itself ‘complicit in the war’ by not opposing the Nazi regime, a new report reveals.

For decades the Catholic Church has been accused of staying silent over the crimes of the Nazis and even acting to ‘bolster’ the Third Reich.

But a new report from the council of Catholic bishops in Germany describes how bishops ‘made themselves complicit in the war’ by not clearly opposing Adolf Hitler.

It also says that bishops did not share the Fuhrer’s racial ideology, but they still helped support ‘both soldiers and the regime’.

The report into the role of bishops between 1939 and 1945 states hundreds of priests accompanied the Wehrmacht on the front-lines to offer spiritual guidance, according to The Times. 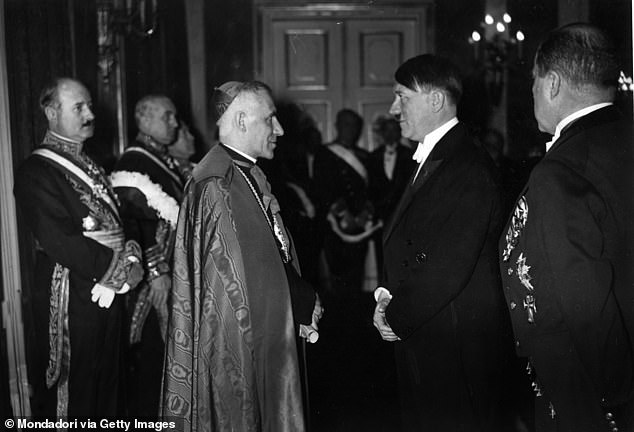 END_OF_DOCUMENT_TOKEN_TO_BE_REPLACED

In a new report after decades of ambivalence, Germany’s council of Catholic bishops has finally admitted to the church’s complicity in the actions of the Nazi regime during World War II, The Times reported Friday.

The 23-page document by the council reportedly states, “Inasmuch as the bishops did not oppose the war with a clear ‘no,’ and most of them bolstered the [German nation’s] will to endure, they made themselves complicit in the war.”

END_OF_DOCUMENT_TOKEN_TO_BE_REPLACED

Germany’s Catholic bishops have acknowledged that they were “complicit” in allowing the Nazis to rise to power and stood by while they launched World War II, according to new reports.

In a 23-page report made public this weekend, Germany’s Council of Catholic Bishops said it didn’t do enough to oppose the rise of Nazi power and even cooperated with Adolf Hitler’s regime during the Second World War, according to a report originally published in the UK’s Sunday Times.

END_OF_DOCUMENT_TOKEN_TO_BE_REPLACED

By Theresa Machemer SMITHSONIANMAG.COM
MAY 5, 2020

Pope Pius XII led the Catholic Church during the tumult of World War II, but his silence on the fate of the millions of Jews killed during the Holocaust has clouded his legacy with controversy.

To critics, the pontiff’s refusal to publicly condemn the Nazis represents a shameful moral failing with devastating consequences. In his polarizing 1999 biography of Pius, British journalist John Cornwell argued that the religious leader placed the papacy’s supremacy above the plight of Europe’s Jews, winning a modicum of power—and protection from the rising threat of communism—by becoming “Hitler’s pope” and pawn. Supporters, however, say that Pius’ silence was calculated to prevent German retaliation and ensure the continued success of the Catholic Church’s behind-the-scenes efforts to aid victims of Nazi persecution.

END_OF_DOCUMENT_TOKEN_TO_BE_REPLACED

Following eleven years’ work, in 1998 a high-level Vatican commission instituted by Pope John Paul II offered what has become the official position of the Roman Catholic Church denying any responsibility for fomenting the kind of demonization of the Jews that made the Holocaust possible. In a 2001 book, The popes against the Jews, I demonstrated that in fact the church played a major role in leading Catholics throughout Europe to view Jews as an existential threat. Yet defenders of the church position continue to deny the historical evidence and to launch ferocious ad hominem attacks against scholars who have researched the subject. The anti-Semitism promulgated by the church can be seen as part of the long battle it waged against modernity, with which the Jews were identified.

END_OF_DOCUMENT_TOKEN_TO_BE_REPLACED

The lawsuit is based on the admission by the three most recent popes of the crimes and evils against humans and peoples committed by the Roman Catholic Church throughout history up to the present moment.

This letter will be sent to the international institutions which in the world represent a morally ethical equivalent of rightfulness, truth and justice to raise their voice and publicly condemn and sanction (prohibit) the religious institution which has done a lot of evil throughout history and still does.

END_OF_DOCUMENT_TOKEN_TO_BE_REPLACED

From crucifixion to suffocation, poisoning to beheading and stoning to starvation, check out 10 particularly gruesome deaths suffered by popes in the early history of the Catholic Church.

END_OF_DOCUMENT_TOKEN_TO_BE_REPLACED

While the Polish authorities focus on fighting an imagined threat to children from what they call the “LGBT lobby”, progress on combating pedophilia inside the Catholic Church, a well-documented phenomenon, remains slow.

Afew days after receiving her first communion in May last year, nine-year-old Julia told her mother she was sick and refused to go to church for further ceremonies planned in relation to this key moment in a Catholic family’s life.

END_OF_DOCUMENT_TOKEN_TO_BE_REPLACED

This list includes a selection of events, people, books and more directly and indirectly related to the Witch Hunts.  Some descriptions have links to online secondary and primary sources (as noted) and/or note is taken of those primary sources in Kors & Peters.  For a chronological and geographical ordering, go to the Witch Hunt Timeline.  Here, they are grouped according to the following categories: